Friends, we’re coming! The Live & Louder World Tour 2017 will take us literally all over the planet, to play for all your rockers in Europe, Japan, South America and the US! And there’s more dates in the works… Lots of new places, lots of places we know and love. We can’t wait to meet all of you on the road! Check out all the dates here & the full press release below.

As Doug comments: “Getting my guitars ready for the 2017 Live & Louder tour! We’re gonna be doing a quick blast this summer…come and hang with us when you hear about the band coming through! See ya soon for a good dose of the Daisies!”

With the massive Live & Louder World Tour, we celebrate the release of „Live & Louder“, our live album, scheduled for May 19th. Here’s a song from the album, ladies & gentlemen: „Make Some Noise – Live & Louder“. You know what to do – crank it up! See ya on tour! 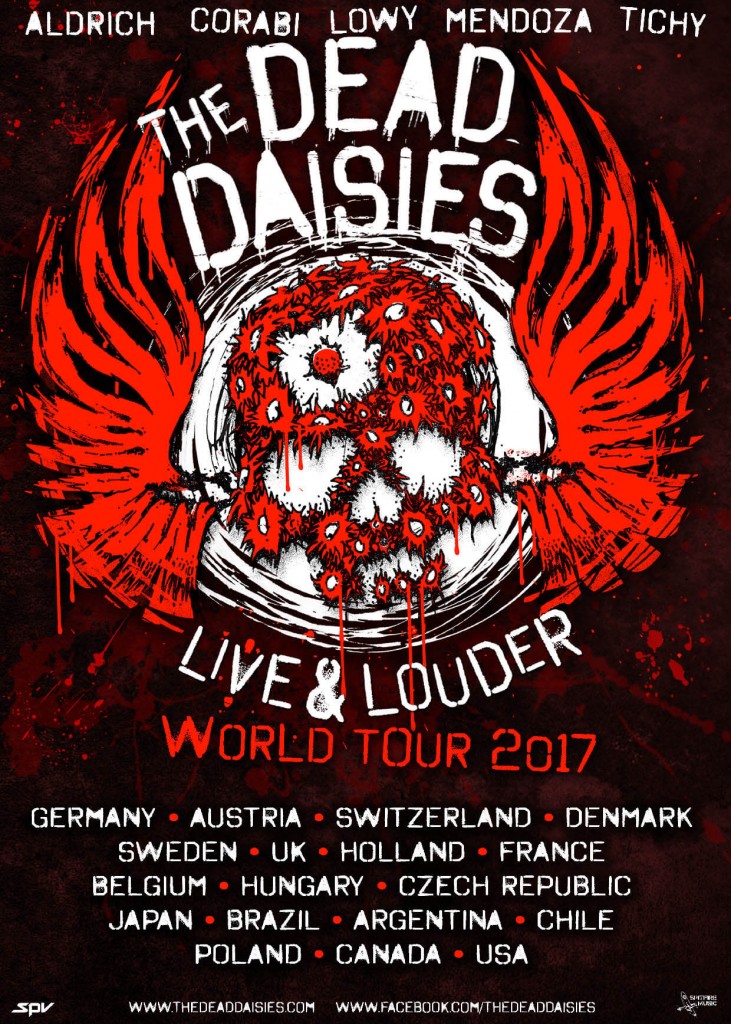 High Octane, rip-roaring hard rockers THE DEAD DAISIES have announced a massive World Tour in celebration of the release of ‘LIVE & LOUDER’, the band’s highly-anticipated live outing, out on May 19th 2017 via Spitfire Music / SPV.

In addition to prestigious high profile UK & EU Festival appearances throughout all of June, THE DEAD DAISIES are set to enthral Japanese fans with their highly-coveted return to the land of the Rising Sun in July after which they’ll travel to South America to make their long-awaited debut. It’s then back to Poland to play “Woodstock”, one of Europe’s biggest Festivals. August & September will see the band embark on their first ever North American Headline Tour where demand has been steadily building after 2016’s smash success of “Make Some Noise” and their summer tour with the mighty KISS

The tour will take the band to many new markets and revisit some old stomping grounds. Lead Guitarist Doug Aldrich adds: “The Dead Daisies update: Getting my guitars ready for the 2017 “LIVE & LOUDER”-Tour! We’re gonna be doing a quick blast this summer…come and hang with us when you hear about the band coming through! See ya soon for a good dose of the Daisies!”

”LIVE & LOUDER”, will be available in multiple deluxe formats & perfectly captures the awesome vibe of their supreme, sweat drenched, roof-raising live sets, recorded on a heady high at the end of an unbelievable 2016. The result, once again mixed by Anthony Focx (Aerosmith, Bad Company), is an absolute stunner!

Lead singer John Corabi: “We’re extremely excited and proud of ‘LIVE & LOUDER’! A lot of the fans have been writing to us and saying how much they LOVED our records but were even more blown away by the band live. The album shows the world how truly loud and supportive The Dead Daisies fans are! Turn It Up!!!!”