There are few rock bands as legendary as KISS. So with America’s # 1 Gold Record Award Winning Group of all time having announced its 2016 Summer American “Freedom To Rock” Tour and to get an opportunity to play with the masked foursome – let alone open a tour for them – is an instant career highlight. And this summer, The Dead Daisies will be doing just that – opening a month’s worth of dates for KISS in the U.S. (beginning August 10th in Green Bay, WI, and wrapping up on September 10th in Huntington, WV) – in support of their forthcoming SPV/eOne release, ‘Make Some Noise’ (arriving on August 5th 2016).

Doug Aldrich: “The Daisies playing with KISS – how cool is that? I have known the KISS guys for ages, so I’m very happy that we get to bring the Daisies to the US on this tour. This will be awesome!”

Brian Tichy: “Once again, I’m psyched to go out on tour soon with The Dead Daisies opening for the mighty KISS! There’s never anything wrong with playing drums in a cool rock band, with your buds, in amphitheaters, in the U.S., in the Summer, opening for one of the world’s greatest live bands! Hope to see you there!“

The Dead Daisies have already established itself as a must-see live act, having toured with the likes of ZZ Top, Aerosmith, Bad Company, Lynyrd Skynyrd, and Def Leppard, as well as their old friends Kiss (including previous U.S., Euro, and Australian tours, plus two appearances aboard the Kiss Kruise). Additionally, the band has been a part of such renowned festivals as the Rockstar Energy Drink Uproar Festival, Rock in Vienna Festival, Download Festival, and Graspop Metal Meeting.

Get ready to rock and roll all night, when the Dead Daisies unite with Kiss this summer! 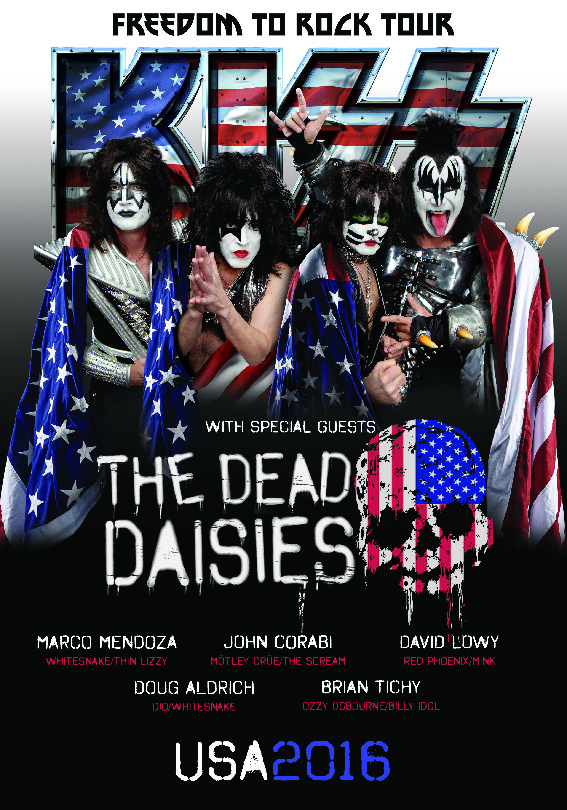