JUST ANNOUNCED – The Dead Daisies to Tour Australia with KISS

Ready for one of THE greatest bands in rock’n’roll history with one of THE most spectacular shows Australia will see this year?

Ready for a stage production called ‘The Spider’, moved by 38 computer controlled winches, featuring 220 automated lights, weighing in at 43,000 kgs, incorporating 900 pieces of pyrotechnics and powered by 400,000 watts of sound?

Add in showmanship that continues to thrill audiences around the world, some of the best damn rock anthems in music history and there’s only ONE band we can be talking about……. KISS!

Get your face paint ready Australia because Paul Stanley, Gene Simmons, Eric Singer and Tommy Thayer are on their way Down Under in October as part of their 40th Anniversary world tour. Kicking off at the Perth Arena on Saturday October 3, then to Adelaide, Melbourne, Sydney, Brisbane, for the first time ever Newcastle and with New Zealand to be announced next week, it’s the news the rabid KISS army fans have been waiting for!

Paul Stanley said: “I’ve loved Australia since the very first time I visited. It is one of the greatest secrets on earth and probably better to keep it that way. The food, wine and women are all extraordinary and everyone has always welcomed me and made me feel like it is home.”

KISS has just completed a Japanese tour, which coincided with the release of a collaboration single with the country’s famous all-girl group Momoiro Clover Z. The song “Yumeno Ukiyoni Saitemina” (Samurai Son) – composed by Paul Stanley – hit #1 on the Japanese charts introducing KISS to a whole new generation of fans. The tour ended with a show for 40,000 fans at the Tokyo Dome last week, featuring the Momoiro Clover Z girls joining KISS for the encore.

With countless timeless hits like ‘Rock’n’Roll All Nite’, ‘I Was Made For Loving You’, ‘Detroit Rock City’, ‘Love Gun’, ‘Shout It Out Loud’, ‘Lick It Up’ and ‘God Gave Rock’n’Roll To You’, the KISS legacy continues to grow, generation after generation.

A KISS concert is like no other, and with tickets starting from just $98, it’s an extravaganza that everyone needs to experience!

ABOUT KISS:
KISS remains one of the most influential bands in the history of rock and roll. As one of America’s top gold-record champions, KISS has released 44 albums and sold more than 100 million albums worldwide. Decades of record-breaking tours around the globe have included high-profile appearances at Super Bowl XXXIII, the Winter Olympics in Salt Lake City, the Rockin’ The Corps concert dedicated to our troops in Iraq and Afghanistan, and special guest appearance on the 2009 American Idol finale that boasted 30 million viewers and a 2010 Dr. Pepper Super Bowl commercial and advertising campaign in support of their Hottest Show On Earth tour. KISS is currently featured in major advertising and marketing campaigns for John Varvatos and Google Play. In 2014, KISS launched their inaugural Arena Football League Season with the LA KISS Football team bringing professional football back to Los Angeles. The unparalleled devotion and loyalty of the KISS Army to the “Hottest Band in the World” is a striking testament to the band’s unbreakable bond with its fans.
KISS is celebrating two major milestones, their induction into the Rock and Roll Hall of Fame in April of 2014, as well as the band’s 40th Anniversary. KISS 40, a new album celebrating 40 years of Rock ‘N Roll is available now.

Tickets on sale – Thursday March 26 at 2.00pm from www.ticketek.com.au 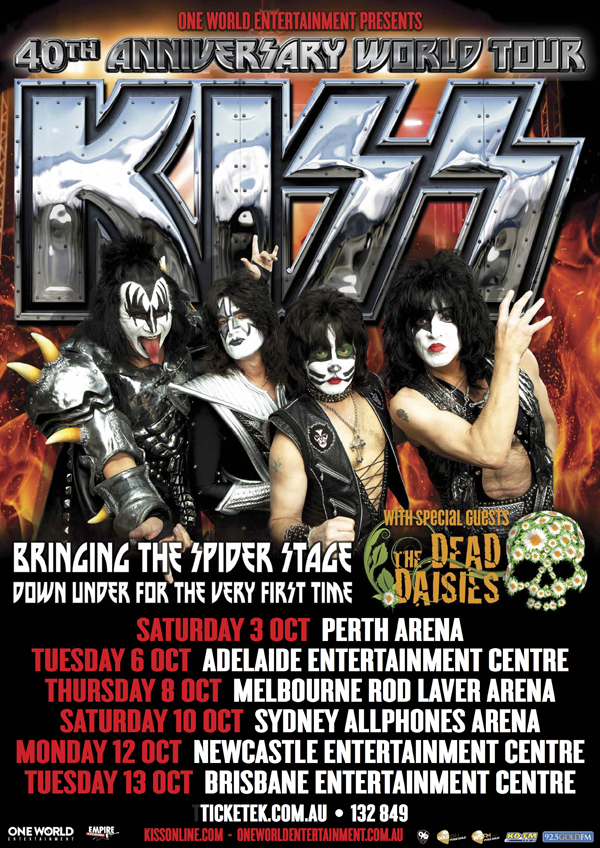 Share on FacebookTweet
DekiJUST ANNOUNCED – The Dead Daisies to Tour Australia with KISS03.11.2015