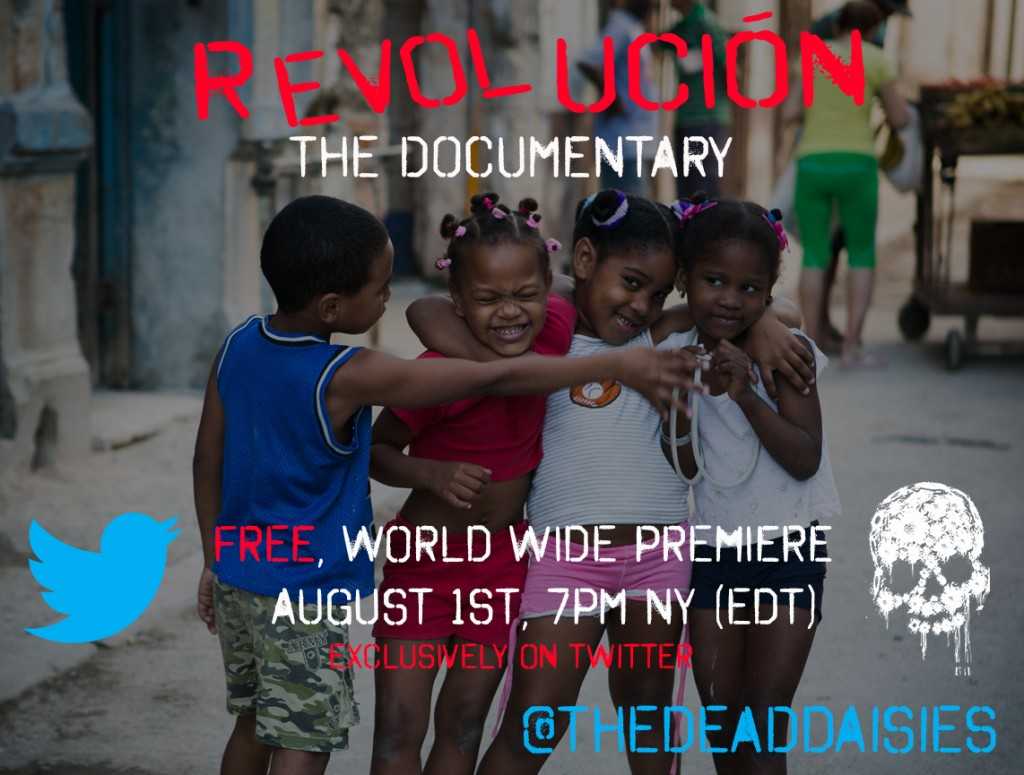 TWITTER TO WORLD PREMIERE THE DEAD DAISIES DOCUMENTARY ABOUT HISTORIC CUBAN TRIP
The Dead Daisies are proud to announce that their documentary film about their historic trip to Cuba, titled Revolución will be premiered world wide officially by Twitter.

On August 1st, 7pm NY (EDT) Revolución will be the first documentary ever to be premiered on Twitter. The documentary showcases the inspirational and cultural exchange that occurred between the Cuban government, the people of Cuba and The Dead Daisies in February, 2015. The rock band’s tour of Cuba was the first for an international band since the Obama administration loosened travel and trade restrictions with the island country.

Proving that Twitter is truly a global company, the social media platform hit the road and exclusively took fans to Cuba with The Dead Daisies via the bands @TheDeadDaisies profile page. Twitter gave fans a full virtual experience of the trip which included Q&A’s with the band, video footage and photos constantly tweeted out in real time from Cuba. This provided an unprecedented cultural insight and an amazing experience for The Dead Daisies’ 43,000+ followers.

While in Cuba, The Dead Daisies performed both acoustic and electric shows and recorded tracks for their upcoming album also titled, Revolución. Highlights of the trip included visits to music schools and workshops with students and local musicians. The Daisies’ trip concluded with the Cuba Rocks for Peace concert at the legendary Salón Rosado de la Tropical, considered a cathedral for Cuban popular music, having hosted the best-known bands in the country for decades.

The album Revolución has already been released in Europe to high acclaim with Classic Rock Germany reviewing it as “The best Rock album I have heard in a long time.” The album will be released in the USA on July 31st and Australia on September 18th along with a coffee table book, ebook and vinyl release.

The Daisies will be touring with KISS in Australia come October and are currently touring the USA with Whitesnake. Across both tours The Daisies will both be live tweeting and streaming behind the scenes content via Periscope, so make sure you follow The Dead Daisies on both platforms to experience life on the road!

Tour Dates with KISS in Australia and New Zealand