THE DEAD DAISIES HEAD TO CUBA – ROCK FOR PEACE

While in Cuba, The Dead Daisies will be performing both acoustic and electric shows as well as recording tracks for their upcoming album and jamming with Cuban musicians Yasek Manzano, Carlos Miyares, Michel Herrera, Alejandro Martinez, Harold Lopez and Yaimi Karel. The group will also visit schools and conduct workshops with students and local musicians. The Daisies’ trip will conclude with the Cuba Rocks for Peace concert at the legendary Salón Rosado de la Tropical with the band and guests on Saturday, February 28. The Salón Rosado de la Tropical is one of the most important venues in Cuba and is considered a cathedral for Cuban popular music, having hosted the best known bands in the country for decades. Joining The Daisies on this shrine of a stage on the 28th will be Cuban artists, David Blanco y su grupo and Anima Mundi.

The trip is the first for an international rock band since Obama loosened travel and trade rules for the country, “For my entire life, Miami was as close to Cuba as myself and all Americans could get and I assumed it would remain that way for the rest of my time,” attests Dizzy. “Now, we are all coming down to Cuba to play some kick ass rock n’ roll and soak in the culture, the food, the RUM and of course, the music. And with the long overdue changes in diplomacy just ahead, it feels like the right time to come and hang. It’s been a life long dream of mine to experience Cuba, so much history and influence in this part of the world, and now that is about to happen. Can’t wait amigos!”

Guitarist Richard Fortus adds, “As an American, playing in Cuba is an incredible opportunity. To work and learn from Cuban musicians, and to experience their unique musical character is a dream of mine.  I know this will be one of my greatest experiences yet!”

“I’m really looking forward to a first visit and experience in Cuba,” says Mendoza. It’s always been on my list of places to visit, being a fan of Afro-Cuban history and artist and the fact that I speak the language is also going to help. It will be a fantastic time, and now with The Dead Daisies, it’s sure to be something very special and memorable; A Rock’nRoll Buena Vista Social Club! VIVALAROCK!!”

Following their international diplomatic summit of rock, The Dead Daisies will finish recording their new album in Sydney, Australia and then head across the pond in June for a month of European dates with KISS. More details on those dates still to come.

Formed in 2012, The Dead Daisies are a powerful musical collective created by a rotating line-up that features some of the best Rock musicians on the planet with a sound that’s influenced by late ‘70s and early ‘80s hard rock – big choruses, powerful melodies and strong hooks.

The Dead Daisies are showing the world that a “classic rock” sound still has what it takes to get people hooked. They released their self-titled debut album was released in the US and Canada through Caroline/Universal in 2013 and followed that up last year with the Face I Love EP, which was released in conjunction with an innovative App, where fans helped create the artwork for the EP cover and touring posters. 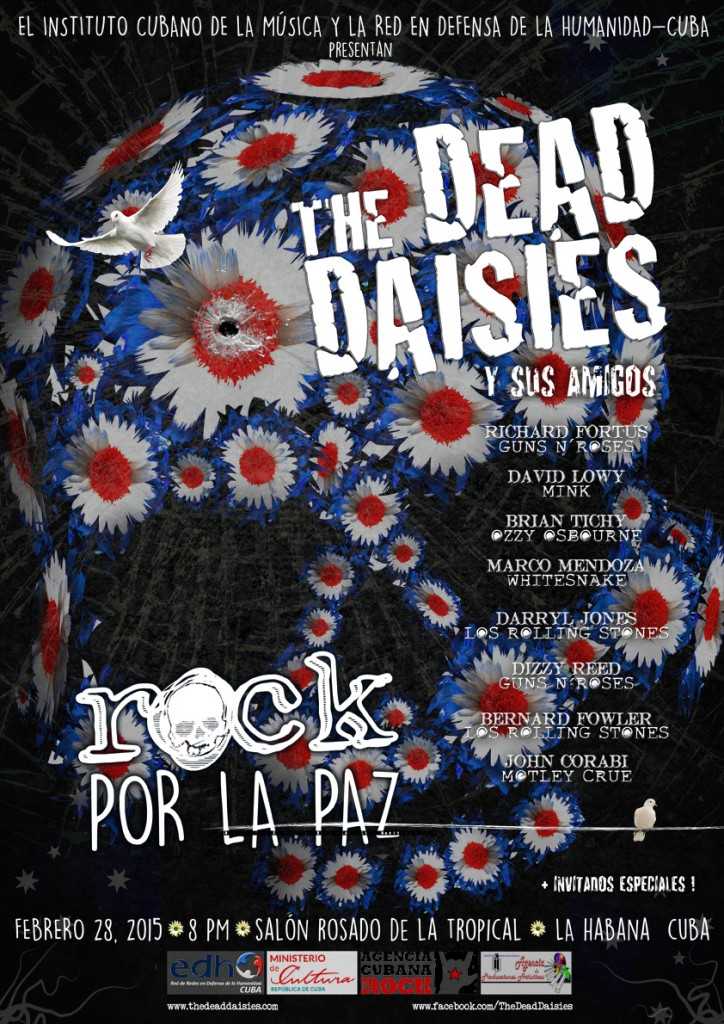