Mark’s account of his time in Amsterdam with The Daisies 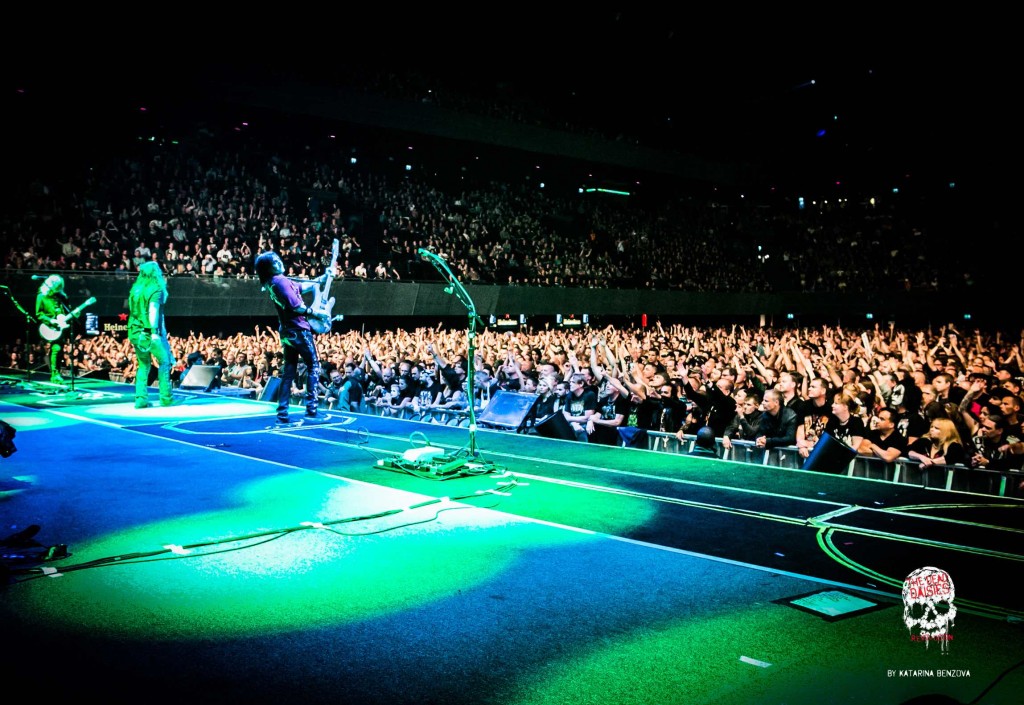 Its been quite a while since I was last in Amsterdam (I think I was 6), so quite a while. In those following years I’ve done a lot, but more recently and the reason why I find myself in Amsterdam is my work with The Dead Daisies.

Its been over two years since my initial connection with the band started, discovering them online due to the intriguing line-up, then realising they would be playing my hometown of Inverness in Scotland. Now, competitions are something I never usually enter, as I very rarely win, but when the opportunity came up 18 months ago to meet the band and fly to a gig with them, I thought why not. To my great surprise I won, and ever since have found myself part of the backroom team, helping to promote the band in various ways, utilising my background running design and marketing agencies, playing in bands and writing for music publications.

This would be my third trip with the group having accompanied them for a week in New York and New Jersey last year for the KISS/Def Leppard tour. This time round they were on KISS’s European tour.

On our day of arrival, my wife, Iona and I made our way to where the band were staying, I had to see manager Dave about some cds I had to deliver in London and arrange to meet them the following day.

Approaching the steps of the hotel I noticed John Corabi sitting there so I went over and introduced myself (we had not met, as this was Johns first full tour with the band). Within five minutes we were in the bar having a drink and talking rock and roll. From a personal note, I had only ever bought one Motley Crue album in my life and it was the one John sang on, so it was great to meet the singer but more importantly, the person who is a top guy. Over the following two hours I caught up with Dizzy, Richard, Marco, David Lowy, manager Dave Edwards, tour manager Tommy and was introduced to current tour drummer Tommy Clufetos. 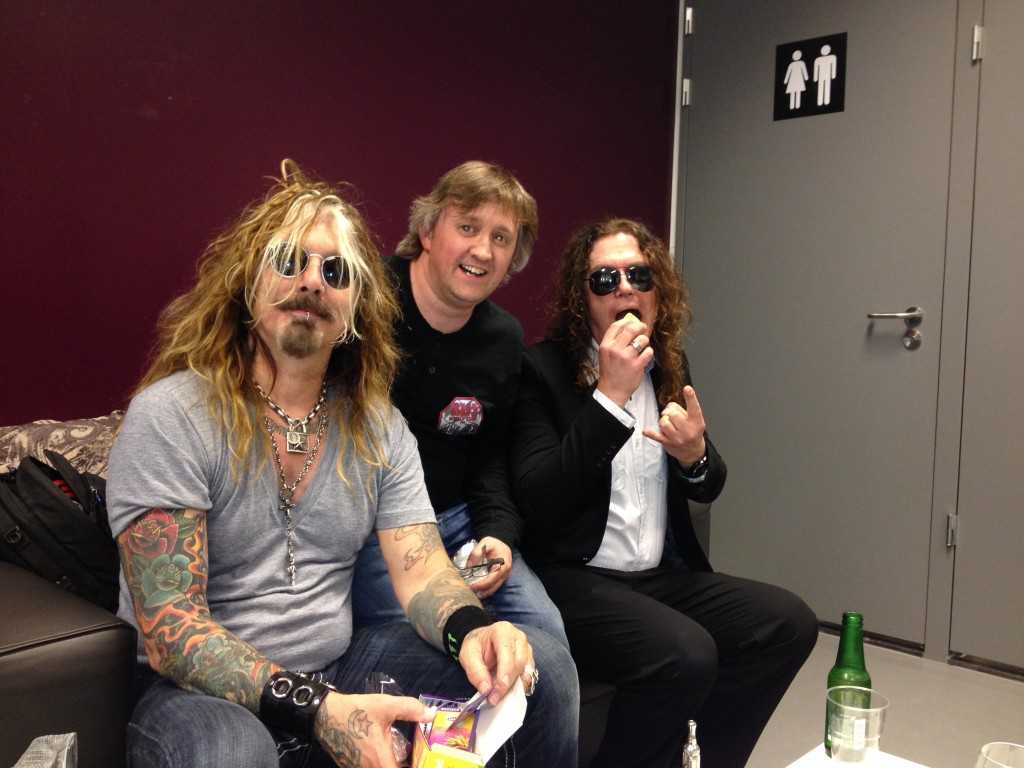 Once I caught up with Dave and had my instructions, I made sure a package that Mori in New York (who handles marketing and much much more!) and myself had been chasing around Europe had arrived at the hotel. It had, much to our relief. I had originally intended to head to London on Friday to see the Foo Fighters which of course was cancelled due to Dave Grohl taking the saying ‘Break a leg’ too far. Mentioning this to Marco, he told me that he had been talking to Paul Stanley about it the day before as he had just spoken to Dave (Grohl). I departed the hotel and made my way to meet some friends. 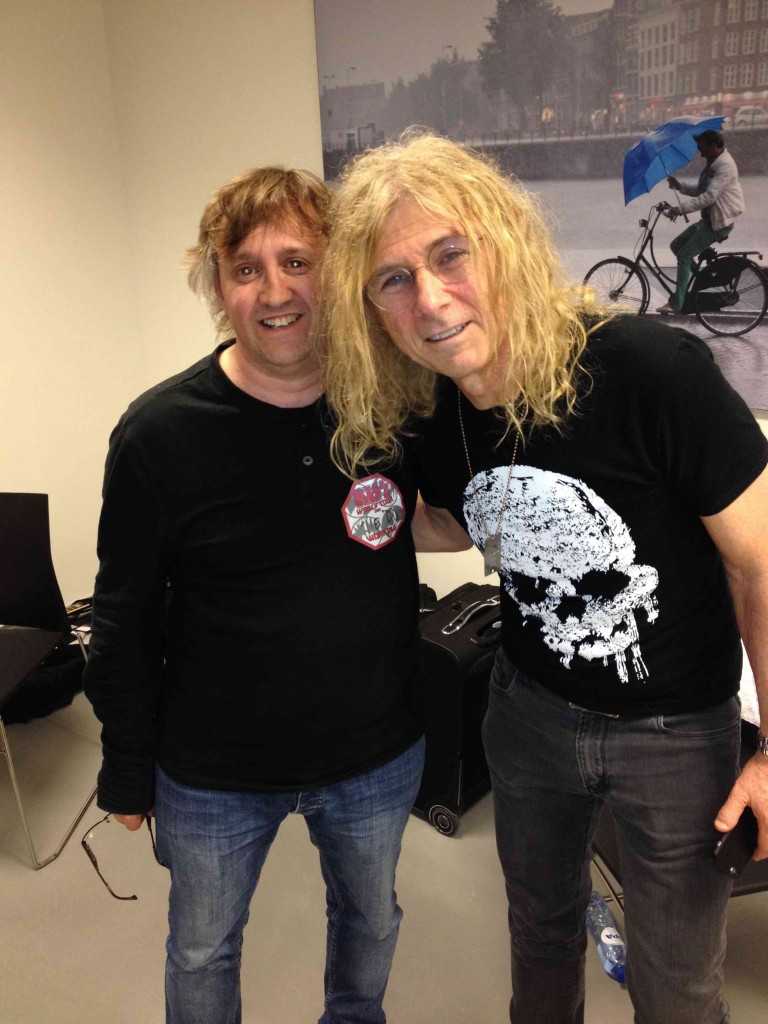 After a wander around Amsterdam as a tourist during the early part of Thursday, including a bit of an eye opener in the Red Light District, and in my wife’s case, I mean an eye opener, haha, we went to find a local print shop to print a personalized birthday card for Dizzy.

We arrived at the Amsterdam American Hotel in time to jump on the band bus to the gig at the Ziggo Dome. On route I found myself teaching Marco how to greet someone in Scottish, and handed out some band buttons, which John Corabi immediately added to his jacket. We then collectively sang a rendition of happy birthday to Dizzy before arriving at the venue. Tommy met the bus and handed out passes before leading us to the dressing room area.

If you’re a musician, you will know the drill. There is a lot of hanging around and killing time, usually hours of it before the very short magical period of the gig itself kicks in and the adrenalin and excitement make the climax of the performance worthwhile.

Leading up to this, Iona and myself found ourselves in a bizarre conversation with no other than an unmasked Gene Simmons. He asked her if she spoke Dutch, which she replied, “No, I’m Scottish”. He then proceeded to tell us the Scots don’t pronounce our ‘T’s’, which I hadn’t thought about until that point, but he’s not wrong. After we had a laugh, Gene went in to the lift, and Iona suddenly said, “I was too slow, I should have told him, we are good at pronouncing our ‘F’s’!” which the small Scottish contingent found amusing. Our numbers had been bolstered with the arrival of Chris Glen (former Sensational Alex Harvey Band/MSG bassist) and some members of his band from Glasgow, as Chris would be joining the band on-stage.

After a few run throughs of ‘Midnight Moses’ in the dressing room, the band was ready to take the stage. Everyone made their way down through the various corridors and rooms that led to the backstage area before taking the steps up to play in front of about 15,000 people.

Iona and myself headed for the front of the stage and stood and watched the show underneath the big screens. We handed out plectrums and badges to some of the younger members of the audience at the front.

The gig sounded awesome, and having seen various line-ups, I have to say this one rocked the hardest. ‘Mexico’ opened the show and Chris Glen came on-stage with his bass to play on ‘Midnight Moses’. Forty five minutes of theatrics, screaming guitars, great melodies, thunderous drums and hooks that could catch a whale, the band left the stage after an intense version of ‘Helter Skelter’ to a rapturous applause from nearly every member of the audience.

Once the band came off stage they were led immediately to the merchandise booth where fans had the opportunity to meet them and have their autographs and pictures taken with them.

Iona said her goodbyes and headed in to the arena with friends to catch her first KISS show while I went with the band to collect some cds and see them off. We all spent some time in the dressing room taking photos; packing up and listening to some of Chris Glens rock and roll stories. 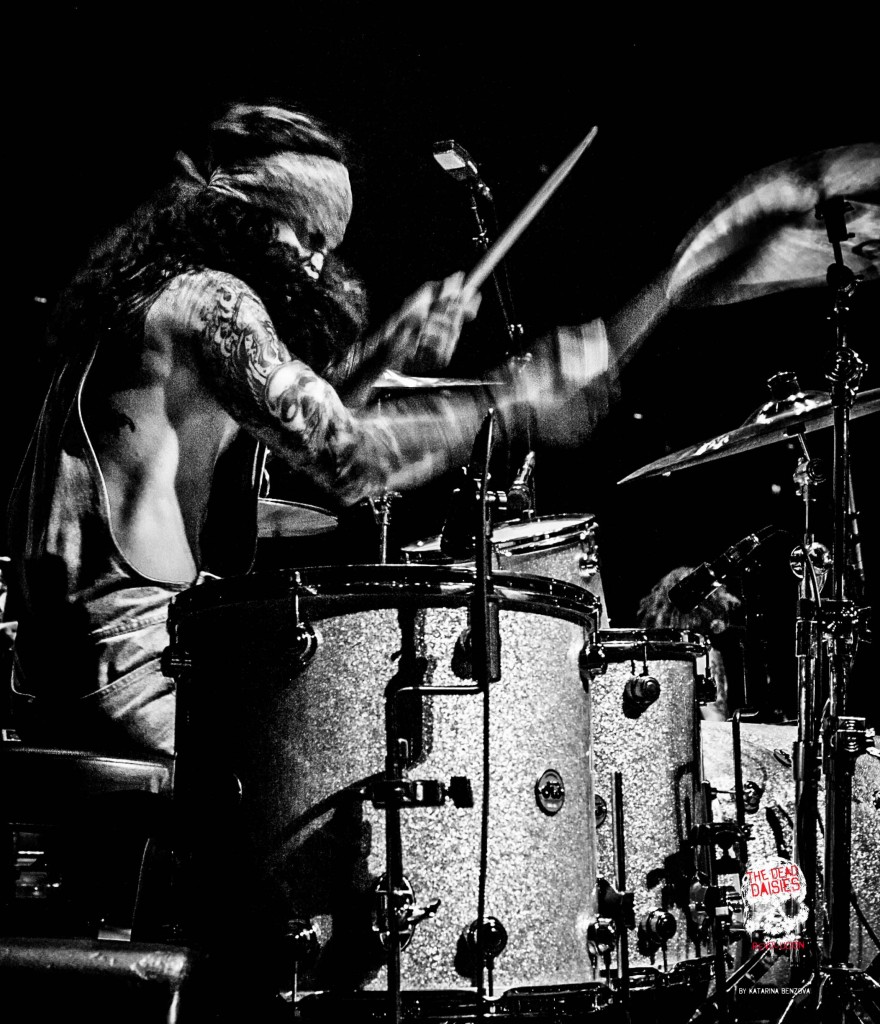 Just after ten, the band headed for the bus. I said my farewells to members of the band, Pat and Lee the road crew, Kat the photographer and Dave and Tommy. I will catch up with them again at some point on the Whitesnake trek and their imminent return to the UK. I am always ready and willing to help out on the road whenever Dave needs an extra pair of hands or back at base where I resume my role today designing the next tour poster.