The Dead Daisies to rock Sunderland 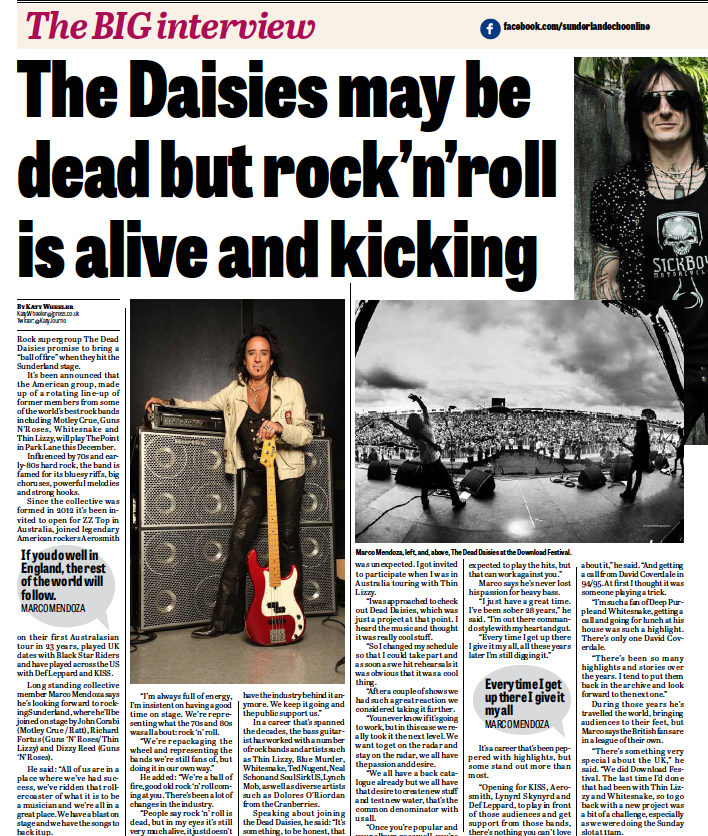 Rock supergroup The Dead Daisies promise to bring a “ball of fire” when they hit the Sunderland stage.

It’s been announced that the American group, made up of a rotating line-up of former members from some of the world’s best rock bands including Motley Crue, Guns N’Roses, Whitesnake and Thin Lizzy, will play The Point in Park Lane this December.

Influenced by 70s and early-80s hard rock, the band is famed for its bluesy riffs, big choruses, powerful melodies and strong hooks.

Since the collective was formed in 2012 it’s been invited to open for ZZ Top in Australia, joined legendary American rockers Aerosmith on their first Australasian tour in 23 years, played UK dates with Black Star Riders and have played across the US with Def Leppard and KISS.

He said: “All of us are in a place where we’ve had success, we’ve ridden that rollercoaster of what it is to be a musician and we’re all in a great place. We have a blast on stage and we have the songs to back it up.

“I’m always full of energy, I’m insistent on having a good time on stage. We’re representing what the 70s and 80s was all about: rock ‘n’ roll.

“We’re repackaging the wheel and representing the bands we’re still fans of, but doing it in our own way.”

He added: “We’re a ball of fire, good old rock ‘n’ roll coming at you. There’s been a lot of changes in the industry.

“People say rock ‘n’ roll is dead, but in my eyes it’s still very much alive, it just doesn’t have the industry behind it anymore. We keep it going and the public support us.”

In a career that’s spanned the decades, the bass guitarist has worked with a number of rock bands and artists such as Thin Lizzy, Blue Murder, Whitesnake, Ted Nugent, Neal Schon and Soul SirkUS, Lynch Mob, as well as diverse artists such as Dolores O’Riordan from the Cranberries.

Speaking about joining the Dead Daisies, he said: “It’s something, to be honest, that was unexpected. I got invited to participate when I was in Australia touring with Thin Lizzy.

“After a couple of shows we had such a great reaction we considered taking it further.

“You never know if it’s going to work, but in this case we really took it the next level. We want to get on the radar and stay on the radar, we all have the passion and desire.

“We all have a back catalogue already but we all have that desire to create new stuff and test new water, that’s the common denominator with us all.

“Once you’re popular and your album goes well, you’re expected to play the hits, but that can work against you.”

“I just have a great time. I’ve been sober 28 years,” he said. “I’m out there commando style with my heart and gut.

“Every time I get up there I give it my all, all these years later I’m still digging it.”

It’s a career that’s been peppered with highlights, but some stand out more than most.

“Opening for KISS, Aerosmith, Lynyrd Skynyrd and Def Leppard, to play in front of those audiences and get support from those bands, there’s nothing you can’t love about it,” he said. “And getting a call from David Coverdale in 94/95. At first I thought it was someone playing a trick.

“I’m such a fan of Deep Purple and Whitesnake, getting a call and going for lunch at his house was such a highlight. There’s only one David Coverdale.

“There’s been so many highlights and stories over the years. I tend to put them back in the archive and look forward to the next one.”

During those years he’s travelled the world, bringing audiences to their feet, but Marco says the British fans are in a league of their own.

“There’s something very special about the UK,” he said. “We did Download Festival. The last time I’d done that had been with Thin Lizzy and Whitesnake, so to go back with a new project was a bit of a challenge, especially as we were doing the Sunday slot at 11am.

“We had 30 minutes to make our mark and state our case.

“Twenty minutes before, there was only a couple of hundred of guys in front of the stage and we started to sweat for a second. Then within 10 minutes of us being on stage it was packed, we felt so proud. It shows that we are doing something that’s appealing to folks and that makes us want to continue.

“There’s something historical about England. If they dig you, they will follow you everywhere.

“And if you do well in England, the rest of the world will follow.”

Tickets are £12.50 from seetickets.com, Hot Rats in Stockton Road or from The Point Box Office.