THE DEAD DAISIES RELEASE “MEXICO” ON JULY 31 IN AUSTRALIA 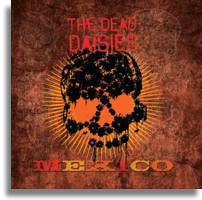 The Dead Daisies are proud to announce the Australian release of their new single “MEXICO” on July 31st. The new hit single is the first from their upcoming album Revolución, slated for release in September this year.

Revolución will be released in the U.S.A. on July 31 and to coincide with this, “Mexico” will be released on the same day in Australia. The promo clip for “Mexico” was Directed by Scottish filmmaker Paul Boyd (INXS, The Cult, Blind Melon, deadmau5) and shot in the infamous Jumbo’s Clown Room neo-burlesque club in Los Angeles, California. View the official video for “Mexico” here

“I couldn’t be more jazzed about our new video for ‘’Mexico”, a bunch of guys hanging out in a little dive south of the border tearing it up? Yep!! Viva La Rock and Viva Mexico!!!! – Marco Mendoza

Adding some spice to the release of “Mexico”, The Daisies have teamed up with Fraser Harley-Davidson Sydney, Pistonhead Lager, and Beach Burrito to bring you a ‘Secret Location’ Private show. There will also be the opportunity to win a customised ‘Daisies’ Harley-Davidson Street 500 Motorcycle with all donations going to The Cancer Council.

“We’ve all been touched by Cancer and lost many friends here and around the world, to that end, The Daisies & Frasers are proud to assist The Cancer Council in raising funds to help find a cure.” – John Corabi

Rave reviews have followed The Daisies who trail blazed across Europe in June with KISS on their 40th Anniversary Tour.  The band performed at some of the largest festivals in Europe including Download (UK), Rockavaria (Germany), and Graspop Metal Meeting (Belgium), broke some records in Paris, whilst having Kerrang! on hand and observing…

“Sunday morning at Donington Park is rarely the most energetic of moments but The Dead Daisies all-star cast do a sterling job of banishing hangovers with slick-as-a-Vaselined-otter classic rock.”

Witness the massive crowds and extensive video footage at the band’s website.

Revolución, released in Europe around their tour dates, reached No. 9 on the Amazon Charts, received amazing reviews, impressed stadium audiences and won over many new fans.

The Dead Daisies are a powerful musical collective created by a rotating line-up that features some of the world’s best rock musicians. Influenced by 70’s and early 80’s hard rock, The Daisies’ sound is soulful and accessible-equal parts The Faces, Bad Company and Foreigner: muscular vocals, bluesy riffs, big choruses, powerful melodies and strong hooks. Whether it was inspired by Elvis or The Beatles, Led Zeppelin or Jimi Hendrix, it always started with the music, and that’s what The Dead Daisies are all about. With stellar musicianship and pulverising live shows, fans across the globe are discovering the band that is bringing back Rock & Roll!

The Dead Daisies are about to embark on a tour of the States with David Coverdale and Whitesnake, then they are headed back to rejoin KISS on the Australia and New Zealand leg of their World Tour.

Tour Dates with KISS in Australia and New Zealand