THE DEAD DAISIES AT COLOSSAL BIKER EVENTS IN THE US!

In addition, we are working with 8 of the largest Harley-Davidson dealers in the country as part of their Rock N Ride promotion to support our Dirty Dozen National Tour. Harley-Davidson owners and customers can win tickets and meet the band!

Check out the following links to find a dealership / show in your area and sign up to win! 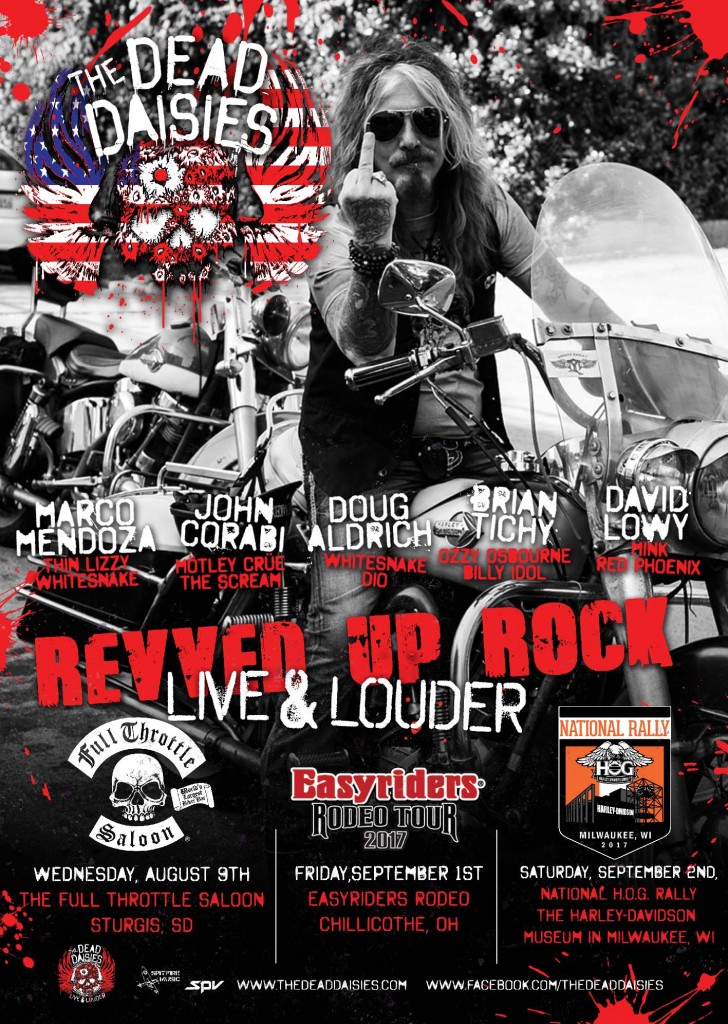 Coming off the band’s appearance at Europe’s biggest biker city event the Hamburg Harley Days Festival in Hamburg, Germany (on Friday, June 23rd) it is announced The Dead Daisies will return to the U.S. for 3 major U.S biker events and performances that follow up the band’s debut Full Throttle Saloon appearance during the Sturgis motorcycle rally last year.

The confirmed performances are as follows:

“Riding gives you a sense of freedom,” explains singer John Corabi. “When your job, family, and daily pressures of life are weighing you down, you can fire up a bike, get on it and ride, and free yourself of everything. Plus, I think all men have an inner “bad boy” in them, and all women (deep inside) WANT a bad boy, as well. I have to admit I’ve felt a bit “tougher” while I’m riding…that is, until I chipped a nail…LOL.”

In addition to these 3 colossal bike events, The Dead Daisies are working with 12 of the largest Harley-Davidson dealers in the country as part of their Rock N Ride promotion to support their Dirty Dozen National Tour.

This promotion will enable Harley-Davidson owners and customers in the appearance markets to have the chance to win tickets to the bands shows and a chance to meet the band.

And with this sort of sound, it makes perfect sense for the band – which features members of Motley Crue, Whitesnake and Thin Lizzy – will be performing songs from their highly anticipated, sweat drenched roof-raising new album, ‘Live and Louder’ (out now!) at several U.S. biker-events this summer.

The band features in their ranks some of the finest rockers on the planet, among them one of the premiere lead guitarists of this day and age, Doug Aldrich (Whitesnake, Dio). He completes a powerhouse line-up consisting of charismatic singer John Corabi (Mötley Crüe, The Scream), bassist extraordinaire Marco Mendoza (Thin Lizzy, Whitesnake), drummer to the stars Brian Tichy (Ozzy Osbourne, Foreigner) and bringing the thunder from down under, Australian rhythm guitarist and founder David Lowy (Red Phoenix, Mink).

Share on FacebookTweet
DekiTHE DEAD DAISIES AT COLOSSAL BIKER EVENTS IN THE US!06.24.2017