The Dead Daisies announced on the Monsters of Rock Cruise! 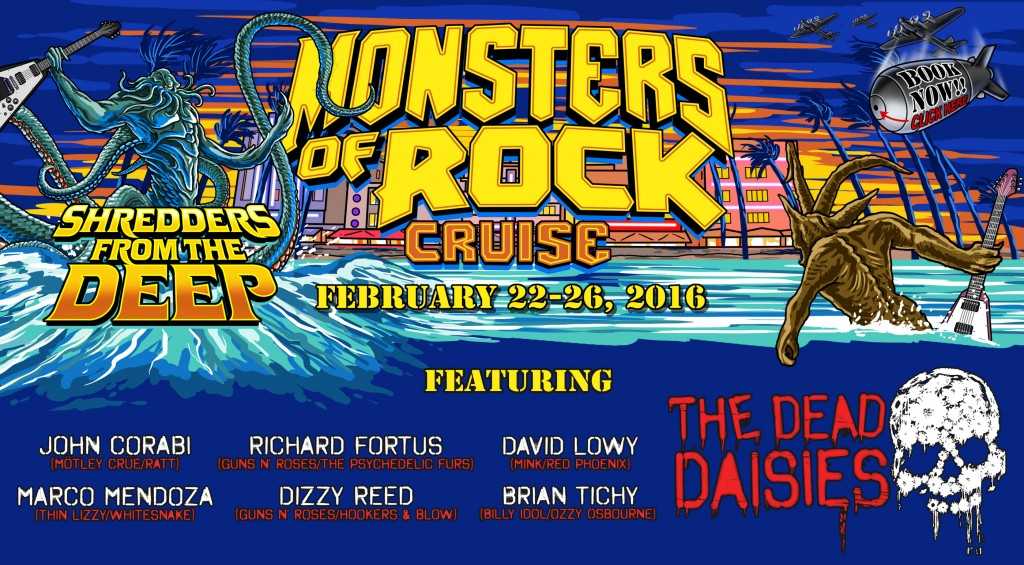 The Dead Daisies are excited to announce they will be joining the Monsters of Rock Cruise. After appearing as special guests of KISS on their world wide 40th Anniversary tour, US and European tours with Whitesnake as well as their own UK/France headline tour to end 2015, the band will hit the high seas and join a fantastic list of classic rock and metal acts on the cruise to kick-off 2016.

MONSTERS OF ROCK CRUISE–the four-day, four-night voyage out of Miami this February 22-26, aboard the NCL Pearl–has announced its biggest line-up ever in its five year history. This year’s cruise, appropriately titled Shredders From The Deep, will feature 40+ bands including headliners TESLA, STEVE VAI, EXTREME, SEBASTIAN BACH, QUEENSRYCHE, HELLOWEEN and Y&T, plus guitar fantasy camps, pre-cruise events and more.

This year’s cruise itinerary includes pre-parties on February 20 and 21 (complimentary to all cruisers with entertainment/location TBA), visiting the private island of Great Stirrup Cay and the cosmopolitan resort meccas of Nassau and Paradise Island in the Bahamas, plus a full day of Metal mayhem at sea. Cabins are available now, starting at $999 per person (double occupancy), with Special EZ Pay financing options also available for as little as $499 USD per person down (double occupancy), with the remaining balance payable over 12 equal monthly installments beginning the month after the initial reservation is completed. For booking and more info, visit: monstersofrockcruise.com and connect on Facebook and Twitter.

New this year to the cruise are Guitar Fantasy Camp at Sea Shredder Clinics, available to all passengers aboard the cruise for free as part of the cabin fee. Clinics will be given by Steve Vai, Vinnie Moore (UFO), George Lynch (Dokken and Lynch Mob), Gus G (Ozzy Osbourne), Michael Angelo Battio and Akira Takasaki (Loudness), with more instructors to be announced. Instructions to reserve these complimentary clinics will be given to cruisers a few weeks before the cruise.

According to cruise spokesman, Larry Morand, “The clinics are designed to give our passengers the opportunity to hone their guitar skills in an up close and personal experience with some of rock’s greatest shredders. Fans don’t just watch the artist perform, they make music with the artists.” In addition to all instruments being provided, artists in each clinic will be giving away an autographed guitar to one lucky fan in attendance.

In addition to the performances and clinics, the cruise will feature over-the-top special events only experienced on this voyage, including: Artist Meet & Greets, Monsters Rock & Roll Formal, Monster Gong Show Karaoke, Rock Star Dating, and Cooking with Rock Stars, and a “So You Think You Can Shred” Guitar Competition, with more events to be announced. As an added bonus, TV personalities and cruise hosts Eddie Trunk and Don Jamieson from VH1’s That Metal Show will moderate the intimate onboard artist Q&A’s. Rounding out the spectacular celebrity line-up are radio personalities Luc Carl from XM’s Hair Nation, along with San Francisco bay area radio host Nikki Blakk.

Share on FacebookTweet
DekiThe Dead Daisies announced on the Monsters of Rock Cruise!11.08.2015