THE VISIT – A VOYAGE OF DISCOVERY 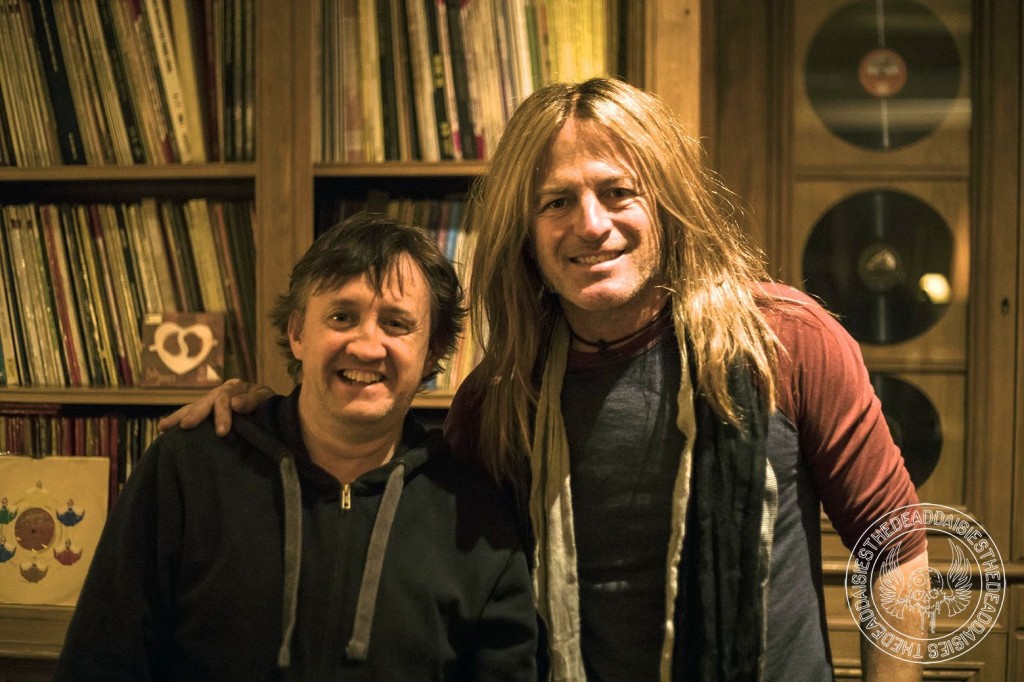 Nearly six years ago to the day I set off on my first ever assignment with The Dead Daisies, starting off in a very similar way as I did today.

First off, I was met by the unwelcome sound of the alarm blasting in my ear at 5am, telling me it was time to get moving! After a dazed shower and mad car rush to the airport, I was ready to catch my flight.

At this point, the stories separate. The first time I was heading to Liverpool to meet the band for the first time, this time round, I am heading to the south of France where The Dead Daisies are locked up in the studio recording a new studio album (the first) with singer and bassist Glenn Hughes, a man that is known well in the rock genre the world over.

My 6.40am flight leaves 20 minutes later than schedule, this is due to the airport fire service having a long lie in on a Sunday (they don’t arrive on shift until 6.30pm)! Somehow you would think that considering there has been early flights leaving Inverness airport on a Sunday for years that this little discrepancy would have been worked out by now!

The flight is smooth and quick with an opportunity to steal an hour’s shut eye on the way. I arrive at Gatwick on time with a five hour wait until the next part of the journey commences. I grab some breakfast, the contents in a box look like a collection of toy food parts, they certainly taste like pieces of plastic, but as I am pretty hungry at this stage, the rubber egg and sausage are devoured in their entirety, washed down with a large plastic cup of soapy water in disguise as English breakfast tea.

I boarded the Marseille flight on time and arrived on time. As we flew out you could see the sprawling city stretching for miles with its cliff edges framing the buildings and the name of the city in its own ‘Hollywood’ style pose perched on an overlooking hillside.

The La Fabrique driver was waiting for me at the airport, so we headed out on the French highway which costs as much to use as taking a train, maybe this is France’s way of tackling global warming! A long time ago I experienced a ride in a taxi in Paris, so I had an insight to French driving, and it didn’t disappoint as we sped up the highway with French jazz style music blasting from the radio. It turns out I shared the taxi with Hugh Grant, although his ride had been two weeks earlier.

I arrived to see the studios lit up like a Christmas tree throughout the courtyard as photographer Fiaz met me at the gate. Before long, I was reacquainted with manager Dave (Edwards) before being shown to my temporary living space for the next three days in an old rustic wing of the chateau.

Once settled in, Fiaz took me on a tour of the studio. Before long I had caught up with Doug and Lee (The Daisies stage manager and in-house technical Einstein) who were busy working away in the studio with producer Ben Grosse. The main console room is like the bridge of the Starship Enterprise with so many knobs to twiddle with and buttons that should come with a sign of ‘what does this button do’!

Every evening at 7.30pm, we all gather in the kitchen and dining area where our chefs Doug and Glen (yes, that really is their names) prepare stunning mouth-watering dishes for the whole team. Both come from Liverpool and retired to the south of France two years ago after selling their restaurant. Catering to various Rockstar’s at LaFabrique came as an unexpected pleasure while in retirement.

At dinner I met Glenn for the first time and found ourselves talking about his dogs as the studios own residential canine Paula wandered in with the vain hope of gaining a little extra from the dinner plates, however, as she has gained a little too much recently, she is on a strict diet. Glenn’s manager Jimi made a fleeting appearance, he has been hibernating in his room for the past few days with a bug none of the rest of us want!

After dinner everyone went off to their own places around the chateau to work or relax and prepare for the next day’s schedule.

The breakfast table conversation was somewhat surreal. Glenn explained that he had spoken to his friend Julien the previous evening as this is something, he does every year on the anniversary of Julian’s father’s death. We were of course talking about John Lennon.

I wandered around the grounds and gardens to this quite amazing place, It is really quite cool the amount of out buildings and skeletons of former buildings that scatter around the main property. The chateau was built in the nineteenth century, quite a few years after the Revolution and was probably owned by a wealthy family in its original days.

Much of my day was spent working or listening in the control room while I sat in sheer awe listening to Glenn put down various vocal parts to the new songs. I know what they are called now but if I told you I would obviously have to kill you (lol). He really is a force of nature when he gets behind that microphone with a range that you could paint a landscape with.

Before dinner, I met the chateaus resident cat Ginger for the first time as he was standing at the front door playfully teasing and annoying Paula the dog. I think he had realised fish was on the menu tonight and was making sure he jumped ahead of Paula before any tasty treats were offered.

After a very late night working on various media projects, myself and Fiaz retired to our respective suites, It wasn’t to be an easy night’s sleep as the wind had stirred up into what sounded like a force ten gale as every old and weathered part of the building we were in creaked, cracked and banged continuously throughout the night.

Tuesday morning brought relief to the weather as the wind had disappeared leaving a gentle calm. The calm was very quickly broken as I started to walk through the various maze of rooms on route to the control room where Doug had taken resident with Ben early on. My skeleton just about jumped out of my skin as I walked past a set of Marshall amps sitting out of the way at the end of one of the stone rooms. Just as I walked past, Doug kicked in to playing a thunderous riff which in turn blasted out of the speakers!

I spent a good proportion once again in the control room where I watched both Doug and Ben dance around each other with ideas and debates of how something should or could sound. Watching one of the worlds best rock guitarists along with a producer that has some hugely successfully albums stacked up in his own personal arsenal was a sight to behold. I have to say, that every time, it was the song that won.

After my final night at dinner, I said my goodbyes to chefs Doug and Glen before returning to the control room for the last time. Doug polished off some very tasty guitar work in the last couple of hours before we all retired for the evening.

After a highly enjoyable and very interesting couple of days it was time to head home. After saying my goodbyes around the breakfast table, I took a gentler journey back to Marseille for my onward flight to London and eight-hour train journey back to Inverness.

Share on FacebookTweet
DekiTHE VISIT – A VOYAGE OF DISCOVERY12.13.2019