Behind The Scenes With The Dead Daisies By Mark Allison

My second chapter of intense activity with The Dead Daisies started for real in New York City on the 30th July. I met the guys for the first time in six months in the lobby of The London Hotel in Manhattan and boarded a bus to go to the radio station WDHA 105.5 in New Jersey.

In reality, it started a few months previously, on discovering the possibility of the band joining the KISS/Def Leppard tour. With being involved in the fan club and various other activities surrounding the band, I made sure I asked well in advance if I could come along for a few of the dates!

Originally I planned be on four of the dates but due to travel logistics I ended up cutting it back to two. As it turned out, this was more than enough with all the activity packed around and in-between these two shows.

24 hours of travel and a five-hour time difference, a sudden change to my personal schedule and after a quick chat with Dave (Daisies manager), I met up with the band at their hotel and headed out to New Jersey for a live appearance on the radio.

Catching up with the guys on the bus whilst sitting with Jon and Dizzy, they updated me on how well the Bad Company/Lynyrd Skynyrd dates had gone, as well as sharing some Kiss fan stories with drummer Brian Tichy. At the station ‘Washington’ and ‘Face I Love’ were played live acoustically, along with an interview with Jon by DJ Terri. On our way back to Manhattan, Marco and myself had a long chat about various things, and when it feels good to be in a musical collective where the chemistry is really working.

Next morning was rehearsal day. I arrived at SIR Rehearsal studios at 11.30am to catch up with everyone and work on various promotional items for The Dead Daisies. The band ran through their thirty minute set a few times just fine tuning it and using the in-ear monitoring system they would be using on this tour. It was quite weird not hearing Jon’s vocals unless you listened to the headphone mix.

As rehearsal time came to an end, everyone dispersed to do their own thing whilst I caught a cab to the band hotel with Tommy (tour manager), Dave Edwards and Marco and we headed out for some Sushi. After a pleasant evening, I strolled back to my own hotel, taking photographs and enjoying the vibrant Manhattan nightlife.

Friday was the last day of rehearsals before the tour started proper. For me, it was a morning of working on biography material for the website as well as preparing material for the band to sign. My afternoon was taken up with various tasks, counting t-shirts and cds, preparing and packing them in containers ready for the tour, followed by a small stint as a roadie helping transport some of the gear to the awaiting the truck with Lee and Pat (the road crew). Waving the band off on the bus (we would meet up at lunchtime in Atlantic City next day) I headed for a hot-dog and early night.

On Saturday we arrived at the Hard Rock Café in Atlantic City. The band were there doing a short acoustic set, promoting their appearance later that night. The short gig was also being transmitted live throughout the area on the local radio. Diners in Hard Rock were enthusiastic with both the performance and Marco’s own personal meet and greet around the tables! The Hard Rock Café is on the famous ‘Boardwalk’, Americas’ first, which we later had the chance to take a stroll along, visiting ‘Caesars Palace’ and various other casino haunts on the way.

It‘s amazing how many people and how much activity and equipment that goes in to putting a rock show like this together. For that small 3-hour window of entertainment, there is the best part of 20 hours preparation. Standing behind the impressive spider structure that makes up most of the KISS stage show, the complexity is apparent.

With it being the first night of the tour, there were some delays before the band could go on-stage which cut their set from seven songs to five, but they killed it never the less. Two thirds of the arena was full, and judging by the reaction they loved The Dead Daisies.

A signing session later, it was time to board the bus and head to Philadelphia. This was my first trip aboard the state-of-the-art tour bus driven by ‘Coldtrain’, hailing from the Deep South; he was a big man with a big personality. An interesting hour and half bus journey later and we arrive at our destination, check in and crash out… next day will be Camden their second show, just over the Delaware River.

There was a buzz of activity in the air next day at the venue, sets were being erected and gear being checked. Once the dressing room was located I took a wander towards the stage to find Pat and Lee. Def Leppard were doing their sound check and I watched ‘Rock of Ages’ from the back. Returning to the dressing room I bumped into none other than Paul Stanley minus make-up, I only read his book two weeks ago!

Before the band took to the stage for sound check, I was introduced to Kiss drummer Eric Singer by Marco. While watching the guy’s sound check you knew again, they were going to kill it.

Sound check complete I grabbed some food from catering then headed side stage with the boys for their second night on the road. They were on fire, and the constant water spray Brian had from Jon didn’t cool it down but created an amazing effect every time Brian hit the soaked drums.

Jon had a relaxed swagger in his performance, Richard jumped around like a crazy banshee while David and Marco continually walked up to the right hand riser like commanders viewing their troops! Dizzy may be quiet and assuming off-stage but he comes alive like a madman hammering his keys as soon as he gets on the stage. As for Brian, the man is ‘Animal’ from the Muppets in real life form! He is wild, fast, crazy, precise and looks like a man that is having the time of his life, and for me personally, he is the final link that gives The Dead Daisies there strongest and most incredible line-up to date. So did they bring their game? I think the answer is a resounding YES!!

The band may have been the opening act but even the guys in Def Leppard commented on how solid they were and I caught Rick Allen sitting off stage watching them.

After playing their full seven songs set tonight they then had one of their best ever turn outs for signings. I handed button badges out to the kids in the line while Kat took some of their pics.

The last few hours were quite amazing. I met Def Leppard’s legendary road manager Mortimer, a small Welshman with a big voice, Paul Stanley again, this time with full make-up, Marco took my picture with him, then one of my all time favourite guitarists Phil Collen whom I also had a pic with. Gene Simmons appeared and the banter went in to overdrive! We all moved side stage to watch their show, I’ve seen KISS five times in 30 years but never from this angle, the heat and explosions from stage right are hot and loud believe me!

We headed back to the hotel on the bus and I said my farewells to everyone. Kat took my pic with the band for a second time. So that was it, but hopefully we will see the band in Europe before the end of the year, we can but hope. 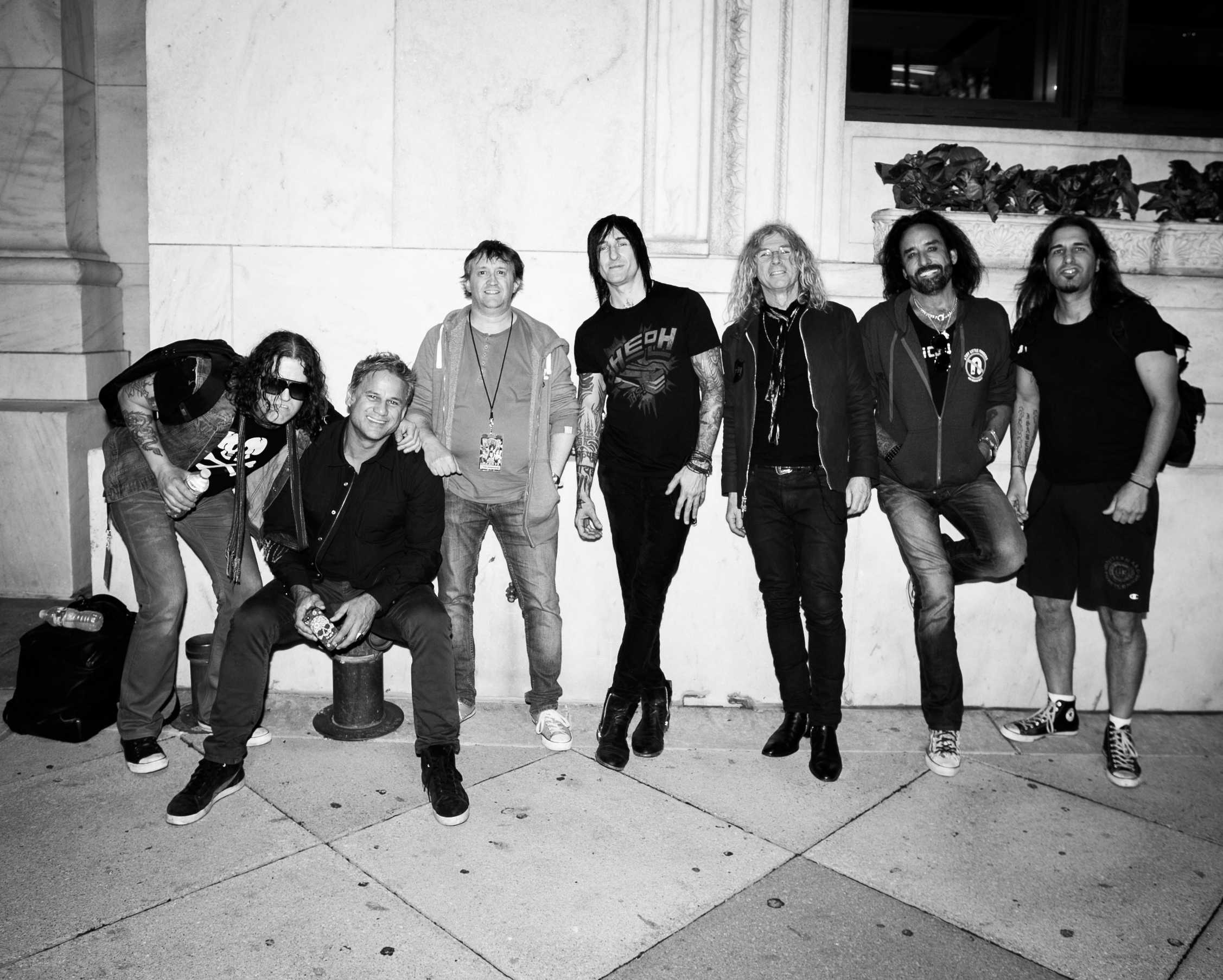 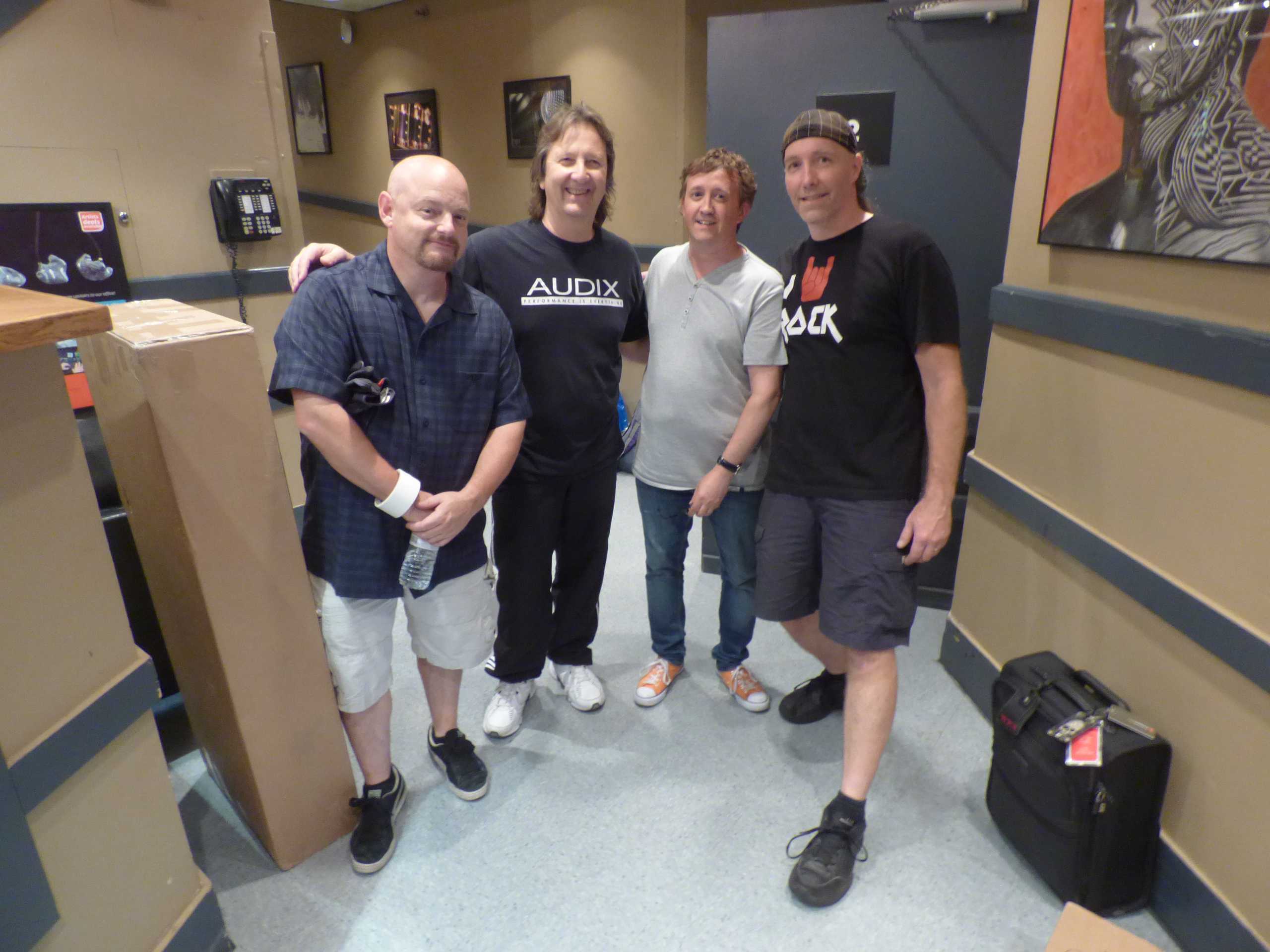 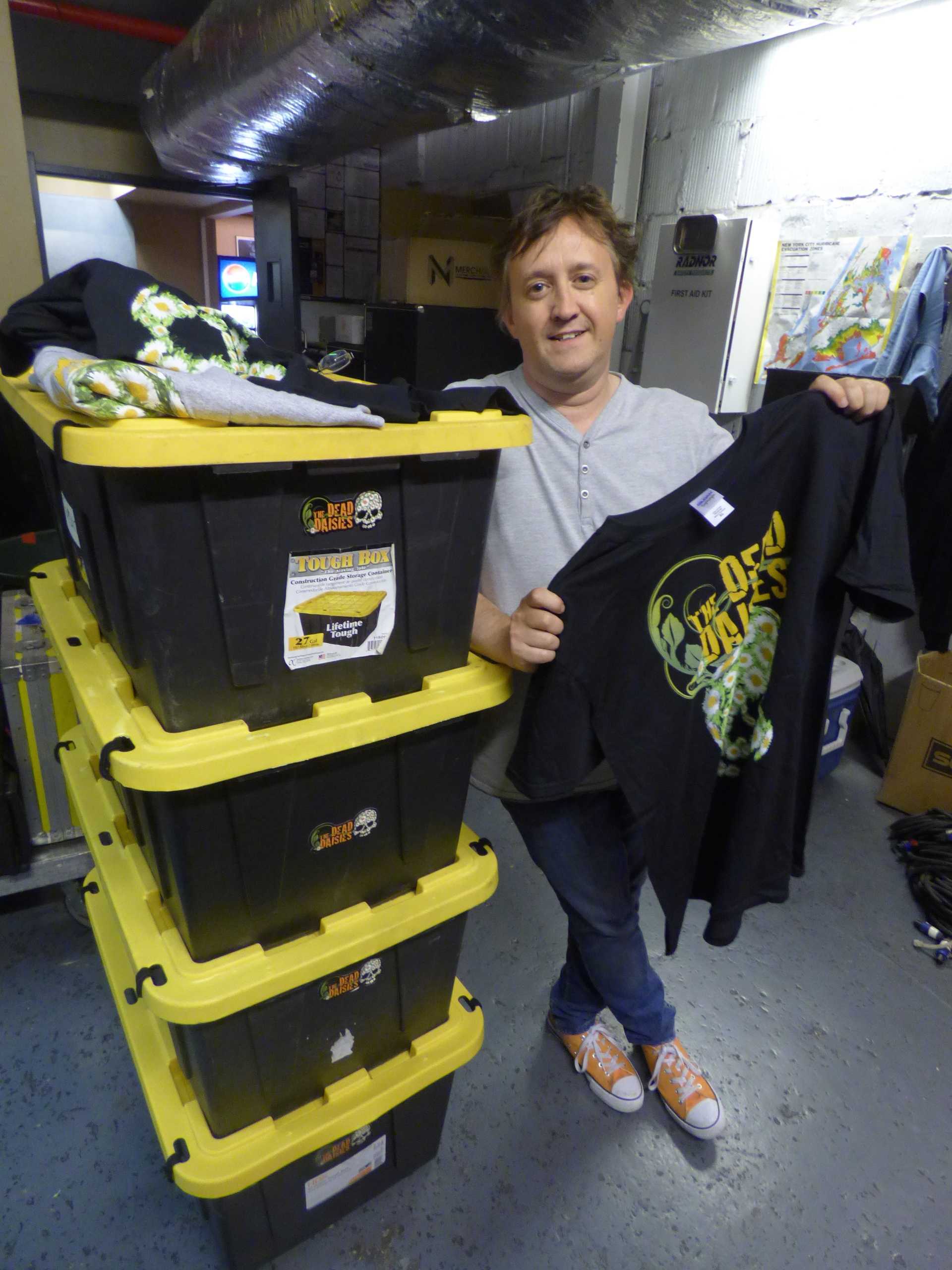 Share on FacebookTweet
DekiBehind The Scenes With The Dead Daisies By Mark Allison08.15.2014